Category: Drama, Humour
Rating: Gen
1st Story of From the Ends to the Beginning

Note 2: Seems like another creative inner wolf is coming out. Awesome pics everyone!
Added Avon and Wolf pic by

Wolf followed Cally's scent, whimpering as it neared and heard her cries of agony. It knelt down and lifted her up with its undamaged arm, holding her struggling body still and licking her face to reassure her that she was not alone. The creature felt inside the utility belt, took out the bracelet and snapped it to her wrist.

Its ears pricked up, the Wolf sniffed the air. The deck beneath its feet shuddered. A rumbling sound was building deep within the heart of the ship. The Wolf struck the button Jenna had showed it. "Arrrr!" It shook its head and its eyes closed as the teleport energies surrounded them.

Jenna rushed forward as Wolf and Cally reappeared on the teleport platform.

"What's wrong with her?" she asked as she helped lay the moaning woman on the ground. Realizing it was a silly thing to ask the Wolf, she looked up and finally noticed the creature's eyes were shut tight.

There was congealing blood in its face, around its mouth and some had dripped down onto its chest. She hazarded a touch to the creature's shoulder. "Are you alright?"

It flinched as her hand touched the injured part and its eyes flew open. "It's me, Jenna." Argus groaned and supported his dislocated shoulder tight against his chest. "Tell Avon we have Cally."

At that moment an explosion rocked the ship. "What the hell was that?" asked Jenna who had grabbed onto the nearest solid mass, meaning Argus, for support, while he winced.

"It takes worse than this to stop me." He rushed off and said behind him, "Call Avon."

Jenna went to the triangular comm control on the wall. "Avon, Argus is back with Cally. She's safe." The woman on the ground continued to moan. "I'm taking her to the medical unit. Do you hear me?"

Kirsten's voice responded over the speaker with a voice that sounded greatly relieved. "That's wonderful to hear, Jenna! We can turn the device off now."

Jenna was about to ask why this was important but decided not to as Cally moaned and her hands pressed against her head.

On the flight deck, Sester and Kirsten stared in amazement as the Thaarn's ship exploded into a million bright fragments and the compression wave rocked the Justice.

Sester roused himself and quickly pressed the button on the device in his hand as he answered, "The Thaarn may have activated a self-destruct."

One second. Two. Three. Avon was still groaning and writhing on the ground.

"Push it again," suggested Kirsten as she knelt down beside the suffering man and put her hand on his shoulder in comfort.

Sester pushed the button again and kept it pressed down. "Nothing." He slid the bar control all the way down. "Still nothing." He rubbed the back of his neck as he tried to figure this out. "It could be…he never had time to add a function to switch it off." He held the rectangular device in both hands and yanked hard, ripping it loose from its connection to the ship.

Avon's moans abruptly stopped and he breathed a sigh of relief. In a hoarse voice, he said, "Thank you." Kirsten helped him to the couch. He collapsed into it and leaned back tiredly.

Argus rushed in. "What happened?"

Sester and Kirsten stared at his blood-stained face.

Sester said with amusement, "Did you eat the Thaarn, Wolf?"

"You're back." An impish grin lifted the corners of Sester's mouth. "Did you eat the Thaarn?"

"You do realize your face is covered with blood, particularly around the mouth?"

Argus wiped the back of his hand across his lips and stared in shock at the blood that came away.

Avon asked, "Do you have a metallic taste in your mouth?"

Avon said dryly, "Perhaps you should ask the Wolf what it's been eating."

"Then I would suggest a strong emetic and several weeks of therapy."

"I'm not the one who ate the Thaarn," pointed out Avon with very little mercy in his voice. Even though he was exhausted, this opportunity to needle Argus was too good to pass up.

"I'll…" Argus's stomach felt queasy. He hoped it wasn't evidence the creature did eat the enemy. "Ask it."

Wolf. Are you there?

One would not eat such a vile creature. One did not wish indigestion.

Argus exhaled in relief. "It didn't eat the Thaarn."

"I do remember that. Fragments. It sliced his throat."

Wolf, what's the salt taste in my mouth?

Did you eat or drink something that would cause a salty taste?

There was silence as the Wolf seemed to be thinking. It said, Lick.

One licked the pack.

What?! You licked people?!

One licked Avon-Alpha and the one named Cally. They were ill.

Argus was outraged. You can't go around licking people with my tongue. He wondered if it was too much to hope Avon and Cally had been unconscious while this licking occurred and that no one else had witnessed it.

The Wolf nodded its muzzle, which happened to be Argus's head. Argus-Alpha does not.

Sester was watching with fascination, "He must be talking to the Wolf. They're sharing the same body."

Avon stood up. "While this may be interesting for people who can see it, I would like to check on Cally."

Argus took him by the elbow, "I'll take you in a minute."

"I prefer the Wolf."

Argus growled in consternation, "Is there anything else the Wolf did while I was away?"

Argus and the Wolf whirled to face him with a snarl.

The psychostrategist lifted up both hands immediately. "No offence. The Thaarn's device did some strange things to the minds of the people on this ship. Just giving you fair warning."

"He may be right. The Thaarn did have such a device. It's most likely on his ship." His head tilted in thought. "It would be educational to study this ship."

Sester said, "It exploded while you were still out."

Argus nodded. "That was the explosion we felt."

Avon's lips pursed. "Unfortunate. He may have set the ship to self-destruct if he died. He didn't want anyone to use his technology. Now, if the Wolf is not too busy." He held out his hand. 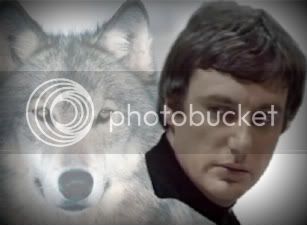 Avon and Wolf pic courtesy of